I know I am quite late to the game at this point, as a result of not writing for the past few months, but I wanted to really dive into my feeling on the subject, with relation to mono/poly relationships. Those of you familiar with my old blog will be familiar with the term, but for the rest of you- a relationship between a partner who is monogamous and one who is polyamorous.

Years on, I look back and realise that I would not repeat the experience, and research of other people’s experience shows that they are notorious.

Looking at other people’s observations, the general consensus is that the compromise both parties experience typically leave both feeling short changed.

The unbalance in relationship structure – half open, half closed – often has fingers pointed at it as an issue, but I have started to think that potentially the problem lies with something else:

Monogamy in and of itself has many virtues. Sexual exclusivity (when practiced perfectly) carries a much lower risk of STIs, to pull up a single example.

However, many people in long term mono relationships become emotionally and socially isolated in extreme ways.

Take L and J (friends of mine in vanilla life) as example – they married a number of years ago. After their marriage, their typical outgoing nature changed. These days they barely go out at all and when they do, they only ever go out as a couple.

I was told about a workmate of a partner’s colleague, who doesn’t go out because she feels that she has to be back with her husband doing nothing fun *in preparation for if they ever have a baby*.

The only reason I can see for this is that there are so many social behaviours which are connected in some way with infidelity. In poly relationships, we are a lot less concerned with ownership and so cheating looks somewhat different, but for monogamous people, they tend to be subject to toxic monogamy culture.

TMC trains people to identify cheating in relationships- both our own and those of others around us. It makes people hyper sensitive to acts which could signal something more sinister. 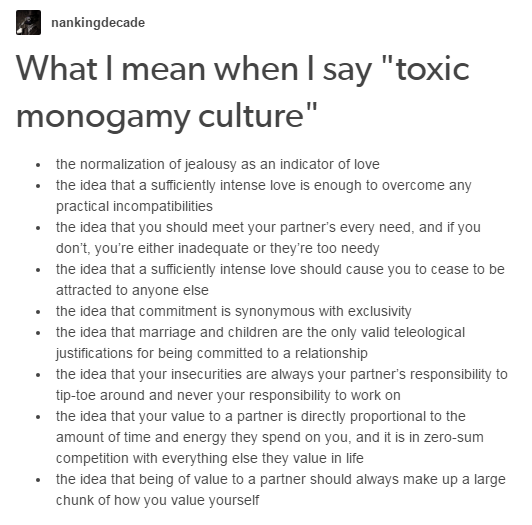 I feel as though many of these come down to unspoken expectations in relationships, because monogamy is the default throughout most easily accessible culture. The hunt for the person you will spend the rest of your life with tends to be depicted as requiring jealousy, or rather; requiring the marking of territory with possessive emotions and actions.

Further, the decrying of the partner’s previous partners because they played with your toys before you even got to open them.

But there is a fantastic thing herein; it means that monogamous and mono-poly relationships can still work. There is nothing intrinsic to them to stop them working so long as both partners are prepared to examine the beliefs they hold about relationships in the same way we examine and deconstruct our privileges. The problem is not monogamy, it’s the beliefs that accompany TMC which negatively affect people in poly environments.

If you are still with me, by now you have to be asking ‘so how do we fight against this?’ – a fine question, when we look at the fact that TMC is built into the media we consume on a daily basis.

Well we need to challenge the unspoken assumptions TMC presents-

1) love is finite, loving one person means you have less love to give others.

We already know that this one is bullshit. You can love your multiple parents, your siblings, your friends and pets, and at no point does your love for any of them take away from your love of the others.

2) Every social, emotional and physical need that you have must be met by one person.

Including but not limited to having both a penis and vagina, should you be bisexual.

3) your relationship must be protected at all cost.

This is something we see in the poly scene too, in the form of unicorn hunters. They typically look for someone to date the couple and there are so many stories of times where when things started to get too tough emotionally, the couple broke off the relationship with the third. It is the reason hierarchical poly is looked down on (even though that too can work), and is the reason I came up with the faberge egg theory of relationships. It signals that the relationship is fragile and more important than anything or anyone who threatens it should be removed by all means effortlessly.

4) true love stops any attraction to anyone else.

If you are attracted to others, you. Can’t truly be in love.

5) If there is change, there are problems.

This is the point I despise the most. The thought that a change in your relationship structure, or emotional intensity, or levels of communication… Any change at all signals problems.

Leave off from the fact that many changes are often preceded by changes in environment, for instance larger workloads lead to more exhaustion, which can lead to changes in emotional effort units (or emotional spoons, for those familiar with the term) available outside of work, this sentiment actively penalises personal development.

6) commitment and exclusivity are synonymous

OK, so only parents can only be committed to the health, wellbeing and happiness of a single child, to the exclusion of any other connections in their life. Gotcha. Synonymous metaphors.

7) your self worth should factor in large part the value placed upon you by others.

Typically, this means SOs in TMC, but the same thinking is extended by single people to prospective partners or even their dating pool.

8) jealousy is an indicator of how much you love someone.

Jealousy is an an indicator of insecurity. It is an indicator that there is something wrong in your relationship, whether that is an imbalance of quality time, a lack of communication. It is a lack of self confidence, and the last thing it is is a virtue depicting a healthy relationship.

*slaps tea out of your hand to emphasise point* 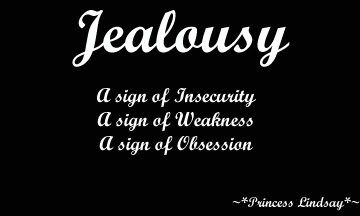 I have done pieces in the past on jealousy and envy, and even poly people can fall victim to any of the statements above, but the difference is that we actively and consciously move away from monogamy as a relationship style.

Let me put that in context: we are subject to the same advertising, the same TV shows, the same depictions of relationships in movies, music and books as mono people, there is not a single poly person out there who has not wondered in dark times whether their life would be so much simpler if they just decided to go mono.

But whatever your persuasion, whether mono, poly, something else, whatever, I am sure we can all agree: Toxic monogamy culture is the fucking worst. Monogamy is fine, is the right choice for many people, but TMC needs to die out.

Anyway, if you have liked this post, please consider buying me a coffee? It helps me to save for other stuff, stuff which is important to me and allows me to focus on the equalities work and content creation.
buymeacoff.ee/LaRasa

Either way, remember that I love you. See you for the next one.