“Have you ever been overwhelmed by a task, by which I mean you find yourself looking at the big picture of a goal you are trying to achieve and it has ground you off track? How do you solve this? Have you ever succumbed to the pressure, resulting in a ‘this is a good day to visit the book store’ type feeling?” -Jon H

Heya Jon thanks for the question, and yeah, I get this all the time. It mostly comes around when other areas of life are placing more demand on my time; work, depression, family being the three that most often steal that time.

So I can look at Hetaera and see in my head ‘I want a website with 5 writers each doing an insightful/hilarious/deep article a week, I want to sell toys, I want the subscription box, a section for art and *ALL OF THE STUFF*, but the reality is that building all of this up from nothing is a daunting task, one which life gets in the way of.

When I was growing up, my way of coping with the overload of everything is that I would take the evening to go and do stuff: buy books, watch a movie, etc, but it has since become a terrible habit. To liken it to another one I have developed along the line: for two years I was on a strict excercise routine where I would hit the gym for an hour a day after uni five days a week. Because it was student years, I would prepare most of my own food, and what I would do is on the weekends, I would bake myself a cake.

What I was doing there was rewarding myself with food. I am a chronic under-eater, and when I do eat it is usually quick, carb based stuff: comfort food.

So for two years, I changed body shape, becoming a little bit more trim, though my weight stayed the same, because I was looking at the end point, the big picture and not really thinking too hard about the steps required.

I have endeavoured to change this in the intervening years: I now try to break down each goal into steps, and each step into sub-steps.

Big picture: centralised site for everything people who like good sex could want.

So let us take step 2 (as that’s what I’m currently working on), breaking that down into sub steps:

And it’s that for every one of the steps.

So when I get overwhelmed, what I am currently trying to do is not do something else (and turning ‘not doing this’ into a reward in my head), but to try and switch to another one of these sub steps, one which is causing me less stress. I then turn working on Hetaera into a reward, instead of a chore, I crave working on articles in the spare ten minutes every now and then.

Another thing I have noticed is that I am *more likely* to start a thing if I don’t talk about it with people beforehand. If I just start doing the thing, whether it’s creating a concept box or cutting up a piece of wood, going from 0 to 1; from nothing to *something* is the biggest step. Anything after that is a matter of fidelity: I can build it up, parse it back, so long as I don’t let it drop to zero. Once you have to start doing something again, it becomes difficult again.

Ok, so you have the steps for the whole process, you have numerous jumping points on things, and you have started on a few of them, but other things are starting to grind you down…

Your question is effectively ‘do you walk away, focus on something else for a while and get your mind off it?’

When you get like that, when the doubt or exhaustion seeps in, instead of getting up and taking a breather, double down. Even if it’s finding the smallest step to proceed, because this is the start; this is the easiest part of the project and later, when the project grows and flourishes, you will give up and walk away.

Forget about the other steps, focus on *this* step. This is a project which needs to move forward, so find a way to have that happen. If you move your location, take the project with you and work on it in the other place. Go to a cafe and enjoy a coffee while you write, or go to a pub with a beer garden and sit outside while making calls to suppliers, whatever.

When I was studying chemistry, we would go across the road to analyse our lab results, because doing tough things is made easier when you do them in an environment that you enjoy.

Teach yourself to enjoy continuing things, to enjoy taking the next step, no matter how small. Remember that procrastination is the enemy. 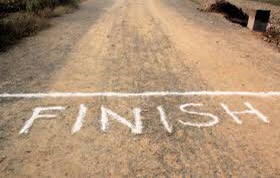 The biggest take home point of this whole piece: learn to finish.

Do you know why venture capitalists are more likely to invest in people who already had a business, even if it was a failure? It’s because they have a record of finishing what they started.

And the biggest secret: it doesn’t matter what it is. If the only things you have ever done are self-published, they speak to your credibility, your ability to finish.

Some people enjoy the starting, the forming of a project, the ideas and early work; the blank canvass. Some like the other side; a lump of clay, or marble, and who can kind of see what they want to do with it. I love finishing things and hate starting them. I like having the basics in place; the wood for the paddle, the finishing material. I have a hundred ideas which fall by the wayside because I don’t have all the prerequisite materials to really get into it, or it seems like such a huge, impossible task at the early stage.

Hetaera has been going for over a year and I am not sure what will happen with it, but I can guarantee that whether the finish is a firework or a slowly melting candle, I will be there, because finishing is the best.

So that’s the one piece of advice I will give: finish _something_

If it’s a script for a movie, finish the script before you start casting. If it’s a painting, finish the outline. Keep finishing, over and over, complete every step, get into the habit.

It is difficult to say ‘I wrote a bad novel.’ I know a load of people who have been in the process of writing one for years, “I’m writing a book” well you know what? Finish the damn novel. “I wrote a book.” Is a hell of a lot better. And yeah, it may be bad, but your next book is going to be a little better and the one after that will be a bit better still.

Finish the article, the painting, the carving, the whatever it is you are working on. Do this by finishing all of the steps needed. It’s no good just recording something; you need to finish editing and put it out there for people.

So, to answer your question, I guess I don’t solve it?

As briefly alluded to above, all of the content produced by hetaera is funded by donations via Patreon. If you would like to show your support, please consider donating a little every month so that we can continue to expand the offerings we provide.